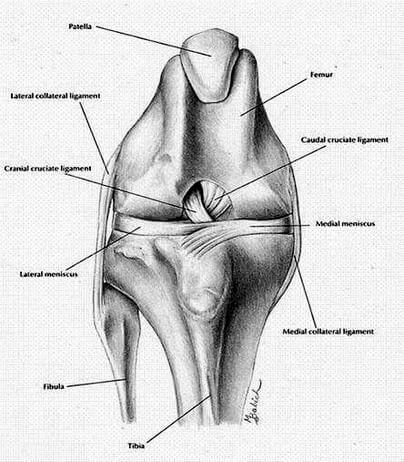 Common surgeries performed by Dr. Lampman include but are not limited to:

Cranial Cruciate Ligament Repair
The most common knee injury in the dog is rupture of the Cranial Cruciate Ligament (CCL), also frequently referred to as the Anterior Cruciate Ligament (ACL). This injury can occur at any age and in any breed, but most frequently occurs in middle-aged, overweight, medium to large breed dogs. The ligament frequently can suffer a partial tear, leading to slight instability of the knee. If this damage goes untreated, it most commonly leads to complete rupture and possibly damage to the medial meniscus of the knee. The meniscus acts as a cushion in the knee. Complete rupture results in front-to-back instability—commonly called Tibial Thrust—and internal rotation of the lower leg—commonly called Pivot Shift. Untreated legs usually become very arthritic and painful from the instability. The following are the most common surgeries performed to repair a torn CCL:


Triple Pelvic Osteotomy (TPO)
Triple pelvic osteotomy (TPO) is a treatment used in immature dogs to normalize hip alignment. The idea is to rotate the acetabular portion (pelvic side) of the hip joint outwards in order to give better coverage of the head of the femur. To accomplish this, the pelvis must be cut in three locations (hence triple pelvic osteotomy), then rotated outwards and secured with a bone plate in the new position while it permanently heals in. The procedure stops the subluxation of the hip joint due to the laxity of the structures holding the hip joint together. The best candidates for triple pelvic osteotomy are young dogs, usually under 1 year of age and ideally closer to 6-8 months, with no signs of arthritis on radiographs.

Femoral Head Ostectomy (FHO)
A femoral head ostectomy (FHO) involves removal of the femoral head—the ball component of the hip joint; the socket component is called the acetabulum. The procedure is performed when hip-joint disease results in continuing pain and other methods of treatment are either not feasible or did not achieve the desired results. Diseases such as chronic arthritis, secondary to hip dysplasia or trauma, can result in continuous pain and necessitate a femoral head ostectomy for relief. When the femoral head is removed, the pain is relieved. After removal, the patient will naturally form a pseudarthrosis–a fibrous (scar) tissue joint.

Stabilization of a Luxating Patella (MPL)
The patella is commonly referred to as the knee cap. In animals the patella is a small bone incorporated within the tendon of the muscles on the front part of the thigh. The tendon from the patella crosses over the front of the stifle (knee) joint to insert into the long prominence (cranial tibial tuberosity) just below the joint. The patella is very important in the normal function and mechanics of the knee. It acts as a lever arm and pulley, increasing the mechanical advantage of the thigh muscles when extending the knee. The patella glides in front of the knee when the joint is flexed and extended. To help maintain a constant and straight gliding pathway, the patella rides in a groove of the femur called the trochlear groove. Whenever the patella is displaced out of this groove, it is said to be luxated. The luxation may be temporary—the patella occasionally slips out of the groove—or permanent. When the patella luxates from the trochlear groove a variable degree of pain occurs and the patient may limp or show discomfort. Also the luxation may produce a feeling of weakness or unreliability, which will result in a limp.

Spinal Decompression for Intervertebral Disc Disease (IVDD)
Disc disease occurs when pressure is placed on the spinal cord by disc material herniating beneath or beside the cord. The condition is commonly referred to as Intervertebral Disc Disease (IVDD),and can occur anywhere along the spine. The condition may be acute (occurs suddenly) or chronic (slowly develops over time). Surgery can decompress the spinal cord at the site of the injury, herniation, or protrusion of disk material.

Amputation
The surgical removal of a body extremity.

Bone Biopsies
A procedure in which a small sample of bone is taken from the body and sent to a laboratory to be examined for cancer, infection, or other bone disorders.

Joint Taps
A diagnostic procedure used to determine the cause of joint pain or other problems. Fluid is removed from the affected joint by and sent to a laboratory for analysis.

Please contact us to inquire about surgeries not described here.

We're Here For You Any Day, Any Time

Our highly-trained emergency veterinarians and technicians have passion for providing high-quality, compassionate care.